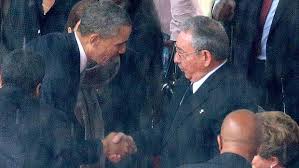 I just cain’t believe all the flack over our president shaking hands with Raul Castro at the memorial service for Nelson Mandela, who happened to be a hero the whole world admired.

OK, Castro’s a Communist, an we’re s’posed to hate him on account of that.

I don’t know how y’uns behave at a funeral, but I was taught you show respect an don’t fight. You git along because things are bad enough with someone newly dead an all, an you hold your differences for another time and place.

To paraphrase Freud, sometimes a handshake is jest a handshake, OK? What did you want the president to do, spit on the man? Our president has too much class for that. In other words, he has a whole lot more class than you complainers.

This should upset you a whole lot more, since most of the people who attacked us on 9/11 were from this man’s country.

Raul Castro is no terrorist and he don’t believe women are inferior to men. He don’t wish us dead just because we don’t believe in God the way he does — or don’t.

He also is a head of state and they were at a FUNERAL, for cryin’ out loud.

A handshake means hello. It don’t mean let’s re-open our embassies and start trading. It don’t say “I love you” the way a kiss does. An if you remember, Bush an this Saudi prince held hands like they was teenage sweethearts.

Where was your complainin’ then? Oh, that’s right. The man who led us into two wars — which he put on a credit card — could do no wrong accordin’ to you.

Oh, an then there was Nixon shakin’ hands with Raul’s brother, Fidel. That was OK too, wasn’t it?

Y’uns are jest a bunch of hypocrites, an I’m tired a hearing all your stupid “scandals.”

If we’re gonna complain, how about admonishin’ the president and the other national leaders who sat there and took a “selfie” with a phone camera durin’ the service. If I’d a been Michelle Obama, I’d a swatted the three of ’em for playin’ around during such a solemn occasion, and then I’d a taken away the phone for at least a week.