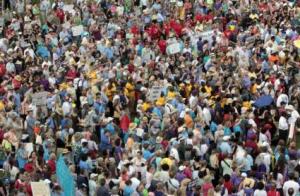 This was the crowd, shot from the balcony of the Legislature Building.

Whew! I felt like I was at one of them anti-war rallies in the late 1960s. We couldn’t move!

Mother Cray didn’t even use her new chair because there was so many people around.  There was benches for her to rest on, plus she had her flask, so we was OK.

Once again, the Reverend Barber’s preachin’ made our hearts beat faster. I believe I would follow that man anywhere, he inspires me so.

Now, some news fella was sayin’ he saw about 1,000 people. I heard one woman tell him he needed to walk around the front of the podium and see the other 4,000 people because there was 5,000 people there if there was a single soul an he thanked her for the information. She said a reporter should know enough to survey the crowd before openin’ up his mouth for the TV camera. Good for her.

We in the mountains was well represented. Two buses from Asheville and I heard some people from Swain County was there and from Waynesville and Franklin. And a bunch more people came from Asheville on their own so they could be arrested because the buses left to go back at 7.

One man who spoke said he’s gonna lose everthin’ because of the unemployment gettin’ cut. He won’t be able to afford his health insurance an’ he might get cancer again. He has a wive an kids an a house, which he’ll lost to them greedy bastards at the bank.

Then a lady named MaryBe McMillan, a labor leader, got up to talk about unemployment an jobs an living wages. She talked about them crooks in the General Assembly tryin’ to make everone work for lower wages an takin’ away union rights.

As people were goin’ in, I saw one man with a flag. He stood tall an straight an he wore a shirt with a dove on it that said he was a veteran for peace. I saw people with walkers, lots of clergy folks an young people, white an black. It looked like America there.

We went over to the Salisbury Street side of the buildin’ so we could wait for the buses to be loaded up with prisoners an we cheered and sang to let everone know we was there to support ’em.

We went back to the motel at about 8 an we slept through the night. That made the drive home a lot better. The kids took good care of everthin’.

But then we got our paper and saw that Senator Tom Apodaca had called us “crap.” That’s the word he used. “Crap.”

To me, that’s like callin’ America “crap.” He ain’t no patriot, that’s for sure.

This entry was posted in Just thinkin', NC politics. Bookmark the permalink.